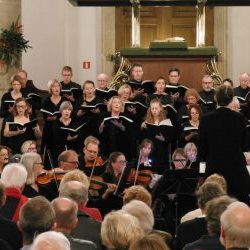 Leiden English Choir is a dynamic and international group of people of different nationalities and age groups. We regularly welcome international students who are in Leiden for a period of time as members of the choir. Rehearsals are largely held in English. We give at least two concerts each year in and around Leiden. One in the Christmas period with, among other Christmas Carols from around the world. And a classical or modern concert in the spring of the year. We sing works by Purcell, Britten, Vaughan Williams and Rutter, but also Pärt, Gjeilo, Vasks, Händel, Fauré , Rossini, Schütz, Lotti, Byrd and others.
Several times we have collaborated with another choir or orchestra. With symphony orchestra Sonante from Wageningen we performed the Requiem by Mozart during a May 4 commemoration in Wageningen. In 2019 we participated with the Toonkunstorkest and 3 other choirs in the world premiere of the oratory `Voyage to Creation’ by Jeppe Moulijn.
Social and serious We work hard and take rehearsals and our music seriously – always trying to achieve the highest possible quality. We are also a social group of people that enjoy spending time together – weekly visits to the local cafe after rehearsal, a monthly ‘borrel’ organized in turn by each of the voice groups in the choir, and post-concert parties to share in the after glow. 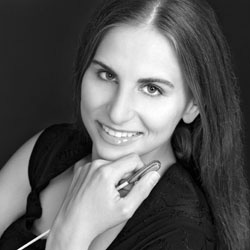 Hebe de Cham­peaux was born in the Netherlands, and was raised in the USA.  She received her Bachelor of Music in violin performance (Cum Laude) from San Francisco State University, and her Master of Music in instrumental conducting from Indiana University Bloomington, and a Bachelor of Music in choral conducting from the Amsterdam Conservatory.  She studied orchestral direction with Imre Pallo, Thomas Baldner, Yair Samet, and choral direction with Jos Vermunt and Jos van Veldhoven.  She studied voice at the Conservatory of Amsterdam with Hein Meens and Pierre Mak, and continued to take private voice lessons with James McCray, Capucine Chiaudani, and Ira Siff. In 2007, Hebe won the Jury’s Prize at the Bela Bartok International Opera Conducting Competition, and in 2009 received recognition of honorable mention for the Taki Concordia Conducting Fellowship for women conductors.  She has participated in conducting masterclasses around the globe with renowned conductors including Kurt Masur, Jorma Panula, and Colin Metters.  Hebe conducts various choirs and orchestras in the Netherlands and is active giving masterclasses in conducting at Bureau Huismuziek and the Muziekpakhuis in Amsterdam.  She sings professionally with Cappella Amsterdam, Studium Chorale, and Hollands Collectief.  She also has a small children’s choir in Amsterdam Noord. 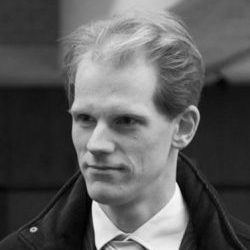 David Dekker is our accompanist – he also accompanies the Leids Studenten Koor en Orkest Collegium Musicum en het Nieuwe Mannheim Koor en Orkest. He studied with Ruth Stelzer (a student of Wilhelm Kempff), Patrick Norro and at the Royal Conservatory with Marlies van Gent. He gave his first solo concert in 2011 performing Ma Mère l’Oye from Ravel and Le Tombeau by Couperin. He often creates program from the works of a single composer. In 2013 he gave a recital of 2 sets of Préludes from Debussy and in 2014 a piano arrangement of Rachmaninoff’s Isle of the Dead. In 2016 he published a CD of Leopold Godowsky’s Java Suite. He also performs regularly with the chamber choir of Collegium Musicum from Leiden University, and with other project choirs.